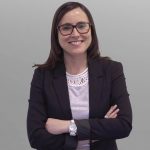 From September 2004 to November 2004 Attendance of legal traineeship at the office of David Pina in the area of EU Law and Competition Law. Internship terminated by the death of Dr. David Pina;

From December 2004 to May 2006 – Attendance of a traineeship at the office of Maria Cecília Carneiro, a specialist in the areas of Family Law and Succession;

From May 2006 to May 2007 attendance of a professional traineeship at the Lisbon Finance Department under the government program PEPAP in the area of tax litigation;

From February 2008 to May 2010 attorney at Law Eduardo Serra Jorge and Maria José Garcia R.L. in the area of legal consultancy in the areas of Labour, Tax and Commercial Law. She has worked in the area of Civil, Labour and Tax Litigation;

From March 2010 to January 2011 lawyer at Servdebt – Capital Asset Management, specialized in banking law in the client’s portfolio “Bank of America”;

From April 2014 to February 12, 2015 attorney at the law firm Belzuz Abogados in the Banking Litigation Department in charge of the portfolio management of Banco Popular Portugal S.A;

From 26 March 2016 to 31 December 2017, Lawyer at CRA – East Timor and Lisbon, assigned to RTTL, EP, Rádio e Televisão de Timor Leste, EP, and responsible for the management of the firm, performing functions in the areas of commercial law (incorporation of commercial companies and registration), criminal law (handling of criminal cases conducted by Embassies) and civil litigation;

Post-Graduate degree in Legal Sciences from the Lusíada University of Lisbon (2007);

Attending Post-Graduate Studies in Data Protection and Companies by the University of Lisbon Law School (2018-2019).
27 Views