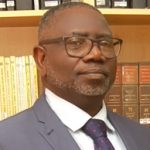 A graduate of the University of Nigeria, Eni has been engaged in the practice of corporate and commercial law for over 30 years. He has advised and acted for institutional and individual clients in several Oil and Gas, Banking and Commercial and Property transactions.

He acted as company secretary for several years, to the boards of Cooper Cameron Corporation Nigeria Ltd and Cameron Offshore Systems (Nigeria) Ltd., both multi-national oil servicing companies. He is currently leading the team of this firm’s lawyers acting as Company Secretaries and Legal Advisers to Port Harcourt Electricity Distribution Company PLC, the successor company to PHCN in the four states of Akwa Ibom, Bayelsa, Cross River and Rivers. He was appointed Liquidator by shareholders of Cooper Cameron Corporation Nigeria Limited in 2007 to wind up the company. He was also appointed by shareholders of another multi-national oil servicing company, C-Mar Services Ltd., to liquidate same in 2008. He oversaw the process of increasing the share capital of a fabrication company to N130, 000,000.00 from N10, 000,000.00 along with allotment of the newly created shares to shareholders.

In his role as Company Secretary, he represented Cooper Cameron Corporation Nig. Ltd. and Cameron Offshore Systems Nig. Ltd in negotiating of CSR obligations with youth associations and leaders of the surrounding local communities in Elekahia, Port Harcourt and later in Onne.

He has a keen interest in Maritime Law. He has been engaged in preparation of charter party agreements and acted for both parties in the sale and acquisition of the tanker MV Victory; has been involved in ship arrests etc. In October 2012, as part of Sterling Law Alliance’s continuing effort to build capacity in its Maritime Law practice, he attended the Lloyd’s Maritime Academy-organized seminar on Ship Sale & Purchase in London. He in May, 2015, attended, in London a seminar “Understanding Power Purchase Agreements” organized by the International Finance Faculty and in Paris, a UIA organized seminar on “How to deal successfully with marketing, communication and managing of Small/Medium Law Firm”

He was appointed a Notary Public in 2015.