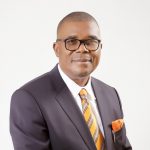 Chief Steve Ugo Ahaneku has over three decades of extensive, wide-ranging and qualitative experience as a lawyer nationally and internationally, in both the private and public sectors. Chief Ahaneku received his LLB (Hons) from University of Nigeria Nsukka, in 1980 and was called to the Nigerian Bar in 1981.Since being called to the Bar Chief Ahaneku has received extensive post-graduate training in oil and gas negotiations at several international courses and conferences, including the Executive Program in Mastering Negotiations at Harvard University and the Association of International Petroleum Negotiators (AIPN) training programs. Chief Ahaneku served as the Chief of Staff to the President of the Senate of the Federal Republic of Nigeria from October 2000 to May 2003, Commissioner for Petroleum and Environment in Imo State between June 2011 and August 2012 and as Commissioner for Transport and Aviation between August 2012 and April 2013. He has at different times advised several oil & gas related businesses. He has at different times advised several oil and gas related businesses. He worked in collaboration with others in finalizing nearly USD 170 Million worth of direct credit financed by Export-Import Bank of the United States. He is currently the Principal Partner of the firm. He is a member of the Nigerian Bar Association, International Bar Association, Association of Petroleum Negotiators (AIPN) and Institute for Energy Law.