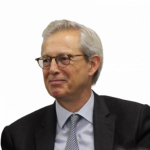 During the last 45 years he has developed an active and satisfactory diplomatic and consular career, starting in Cairo, Rome and Brussels, then holding posts as Consul General in Houston (USA), Nador and Tetuan-Larache (Morocco) – his book “Consular Practice and Immigration” -, and Edinburgh (Scotland), and as Ambassador in Algeria, Greece, – his book “Royal Journey to Greece” -, and Sweden.

He was a member of the Boards of Directors of CASA, NAVANTIA and DEFEX.

After his 70 years, he has dedicated himself to the study of Mediation and Arbitration, finalising two Masters Degrees. Today he is listed as Mediator in the lists of the Ministry of Justice, of MEDIAICAM of the Madrid Bar Association, of the ‘Centro de Mediación Empresarial’ (CMEM) of the Madrid Chamber of Commerce, and of the new ‘Sección de Mediación’ of the CIMA Court. Regarding Arbitration, he is a member of the ‘Club Español de Arbitraje’, participating in one of its Commissions, as well as in international events such as the ‘Open de Arbitraje’.

After being ‘Counsel for Mediation and Arbitration’ since 2018 in the Law Firm “López-Rodó & Cruz Ferrer”, where he specialised in “administrative mediation”, he is very pleased to join now such an international firm as “Lupicinio”.

As a teacher, he has given “Master Classes” at the ‘Universidad Nebrija’, and at the Law School “ISDE”, also participating in different academic forums of the University of Alcalá. He has also appeared in newspapers and specialised magazines.

He expresses his satisfaction for being President of the “Section of Non-Practising Members” of ICAM and for his condition of Corresponding Member of the “Real Academia de Jurisprudencia y Legislación”.