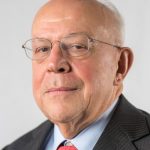 In 1969, together with his friend and colleague Giuseppe Rusconi, he founded the Mondini Rusconi law firm, where both are still active.

He specializes in the field of intellectual property law – with particular regard to copyright, media (including new media, the Internet, etc.), trademarks and patents, unfair competition and telecommunications – and company law. He has assisted, both in commercial operations and in litigation, several Italian and foreign companies operating in Italy in the field of mass media, among which, in particular, one of the major US multinationals in the publishing, music and radio and television industry and sectors it connected.

In recent years, Avv. Giorgio Mondini provided assistance to non-EU citizens for real estate transactions connected with the transfer of his residence to Italy.

The Lawyer. Mondini usually advocates cases before Italian courts of all levels, including the Supreme Court of Cassation, especially in matters of copyright and intellectual property in general. He also performed his services in arbitration, both as a lawyer and as an arbitrator.

He also acts as a consultant for some of the main trade associations in the aforementioned areas. He is also a member of the International Advisory Board of Entertainment and Media Law of the Southwestern University School of Law (Los Angeles, California) and has served as Vice President of the Intellectual Property Rights Committee of the American Chamber of Commerce in Milan.

He often intervenes as a speaker at seminars and conferences and teaches as part of a Masters in Intellectual Property Law dedicated to legal professionals.